The day after a race is always a day of reflection and no matter how well things go you always feel a bit sad. Why? I suppose it’s the prospect of what next? All those months and the weeks of hard training and preparation and then it’s over…

I won’t lie this race meant an awful lot to me. Yes I won gold at the world championships but that was unexpected. This race was very much a target race and one I needed to get right to prove to myself I was worthy of that gold in Pontevedra. I also had the added pressure of crashing 12 months previously in Horst so the Euros was very much unfinished business

Up until 8 weeks away I was unsure if I’d race. I won’t go into detail but after the world championships I fell apart a bit and the fear of not being able to perform as well as i wanted to scared me. At Christmas i got quite poorly and after numerous tests and a operation I waited to hear results which could have changed my life forever. I trained through it all because it was my only sanctuary from what at the time felt like a nasty horrible world. Thankfully the good news came and at that point i knew i had to race. Because let’s face it none of us know what’s round the corner, so I was determined to go for it.

As soon as I paid the entry fee I started to put pressure on myself that I had to win gold. It wasn’t until I spoke with a sports psychologist friend that I realised it wasn’t about the medal, for me the goal was simply to have a great race. A great race could very well mean a medal but it was all about being strong and in control and knowing Id left everything on that course.

Thanks to the right bike coaching from Matt Bottrill and run coaching, support and mentoring from Alan Murchison I stood on that start line knowing i was in the best shape of my life. Matt has, and continues to push me harder than anyone ever before and I have (on just the one occasion) begged him to go easy on me… but he never has. No ifs or buts…I trained my ass off to the point of questioning my own sanity. The pain, the suffering and the tears, the fact that i don’t really have a life, balancing training with being a mum and travelling the country working full time has been a real struggle and has put a lot of pressure on the relationships around me but I’ve never lost sight of what I’m trying to achieve.

And I had a great race… My first run was strong, I came into T1 exactly where I needed to be and from the minute I got onto the bike I knew I felt good. I pushed up that first hill and at that moment everything slipped into place. Every bike session that had hurt me so much in training was paying off. I was strong and I was in control and dare I say, passing people was easy!?   In the final run I just needed to stay focused, there wasn’t anyone in catching distance just me and my inner voice.

As I crossed that line, the sense of relief was immense. I had done what I set out to achieve… I’d had a great race. I was definitely first Brit in my AG but was I in gold medal position? Someone told me I might have won. I had no idea and I know it sounds odd but frankly it didn’t matter. It felt so good knowing Id achieved what I set out to. I had nothing more to give in that race and whatever the outcome the best athlete on the day had won. 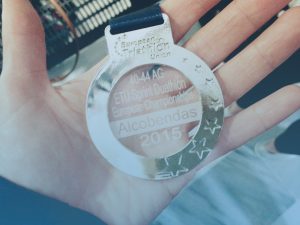