Next up is Alan Murchinson aka Performance Chef who I met at the European Duathlon Championships in 2014.

A few of you foodies out there will be familiar with the name Alan Murchison. Alan is a Michelin starred chef with over 25 years experience. But what you might not know is that Alan is also an ex international endurance runner and a multiple ITU World and ETU European Duathlon Champion, so he’s pretty nippy on a bike too! 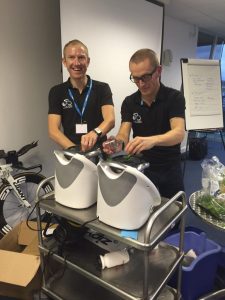 With Performance Chef I had a bit of a ‘eureka’ moment a few years ago at an elite race and recognised there was a need for real life practical application of sports nutrition. I developed this over 24 months working with and learning from some world class athletes including Olympic Triathlon champion Gwen Jorgensen.

It was also a way of getting out of the restaurant business which I had fallen out of love with. Michelin starred cooking can’t be done without passion and drive, I had lost mine and it was time to get out. Could have been a mid life crisis or just a matter of recognising whats important in life, I decided it wasn’t in working 80 hours a week feeding rich people.

Performance Chef allows me to combine my pretty comprehensive food knowledge with the passion I have for sport and helping athletes at all levels achieve their goals.

I now advise 15 Olympians and 25 GB international athletes as well as many ‘normal’ progressive athletes.

2. What gets you out of bed in the morning?
Normally the need for a coffee or one of the dogs howling the house down!

3. What’s been your proudest achievement?
Mmmm tough call, retaining World AG Duathlon championship was very good experience as everything went perfectly, first ever 19 min 10 mile TT was good (now want a sub 18.30) being an eternal optimist (or egoistical git) I would like to think my proudest achievements are yet to come.

3. What food couldn’t you live without?
MEAT! Always been a bit of a meat monster and cant envisage ever not eating meat (or fish)

4. How important is diet when it’s comes to performance?
Critical, so often its the last piece of the ‘performance jigsaw” that we all try to master or recognise needs fixing, so many athletes throw thousands of pounds on the latest aero kit and technology used by the pros, however this is almost pointless if you dont have a optimised diet. I dont believe any athlete who has ever done an Ironman thinks to themselves 8hrs in … “oh i wish i had spent another £500 on wheels” they will be thinking about shitting themselves or giving up on life due to totally screwed up energy levels due to not having trained their gut to perform under pressure.

I would ask yourself why the most progressive and disruptive team in pro cycling (Team Sky) invested in world class chefs, the best portable kitchen ever and the best nutritional knowledge in the world, this wasn’t marginal gains, this was huge fucking gains. Say no more.

The very best and most dominant athletes in the world have the very best diets, this covers all sports.

We have seen time and time again that very good athletes can become world class through sorting out their diet.

5. Whats the most common nutrition mistake athletes make ?
Thinking they can out exercise a bad diet, ‘I train 12-15 hours a week so i can eat what I ike’ thats just nonsense. Just think how good you could be?

An F1 car doesn’t run on economy fuel, neither should you.

6. And finally, tell us a bit about your favourite bike and why?
Well I love my Specialised Shiv TT bike as this is the bike that gets the results I train so hard to try and achieve. But my favourite bike is my Specialized S Works Venge Vias (disc) I rode one of these at a 24hr team race last year and was totally blown away with how it handled and how fast it was, prior to riding it i thought an aero road bike with discs was creating a solution to a problem that didn’t exist, I was very wrong. It is a truly game changing bike. I was lucky enough to get hold of a very limited edition Peter Sagan model which looks like a space ship covered in fairy dust (this isnt the wording Spech marketing would use). It is so fast I am going to try and ride a 19 min 10 on a road bike this season! Mental, glittery, fast and beautifully put together.