Here’s a few words on how my first race in 7 months panned out and why its so good to be back racing!

First 5k Run: I’ve never led a race from the gun so after the first mile I started to panic that I might’ve gone off a bit too hard. I have to say its the best I’ve felt running for a long while and although my pace dropped a bit, the course was lumpy! I came into T1 confident with a solid first 5k…. (even though my Garmin said 5.2K) 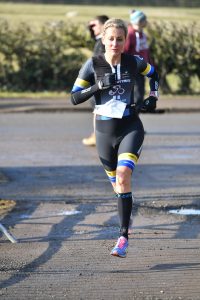 19k bike: Out on to a hard, hilly bike course with quite possibly the worse road surfaces I’ve ever ridden on. OUCH! I’d forgotten how much it hurts peddling after a hard run, queue lots of high cadence and an SOS search for my legs! It was really tough to get into a rhythm and hold position but knowing I wasn’t getting overtaken was enough to keep me battling on. I’d had a sneaky peak at splits from previous races and knew I was a couple of minutes faster so that kept me going. 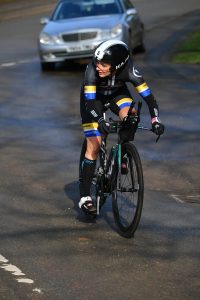 Final 5K: I ran the last 5.2k Solo so I got into a comfortable rhythm and drifted off. I thought about all the challenging ‘stuff’ that’s been going on in my life recently and about what lies ahead and how ‘this’ is my time/my release. Then I thought about how excited Lillie (and hopefully coach Dan) would be when I took home a first lady!

So there you have it, my first race back and I’m itching for more of the same. 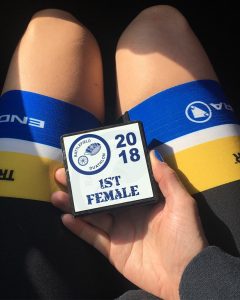 Thanks to coach Dan for his support, encouragement and ass kicking in equal measures and to Liv, Giant Leamington and CEP for their amazing support.