I’m no expert but I’ve had my fair share of setbacks these past few years. In fact I’ve probably dealt with more in my personal life in the last 5 years than I’d hoped to in a lifetime. I’m not talking injuries here but the break up of a long term relationship and the upheaval of leaving the family home and moving four times since then gives you some idea.

As I’m just on my way back from another frustrating injury I thought I’d share a few of my thoughts on what’s helped me get through the tough times.

1. Think about the bigger picture – after my first Duathlon in 2013 (at the ripe old age of 40) I knew I’d found the sport for me. Qualifying to race as a GB age grouper was like a dream come true. I admit, I became a little obsessed but I knew I had it in me to win races. I invested so much time and emotional energy into being the best I could be I think I probably lost sight of the bigger picture…. after all its not my job, I simply do this for fun!

In Apr 2014 I went to Horst, the Netherlands and proudly wore a GB Tri Suit for the first time. I put so much pressure on myself that day I messed up. After leading the first run I hit a barrier less than 3mins into the bike course and flipped my bike. I went to get back on but I’d snapped the two front forks. So that was it, race over in a flash.

At the time I stood at the finish line numb to what had happened, cheering everyone else in. But of course it had hit me hard. I was devastated, depressed even.  It’s only now looking back that I realise how trivial that sounds. That race taught me a lot about myself and how to step back and see the bigger picture. There are tonnes of other races and opportunities and I’m a firm believer that it’s these setbacks which make you a stronger person and athlete. Following that race, I went on to win gold at the World Championships and silver at the Europeans.

2. Keep perspective – another really important part for me is keeping perspective. I had an injured hand (nothing major) and a trashed bike after Horst, hardly life threatening!!!

Only a few people close to me know that I had a pretty major health scare before the 2015 European Championships. I remember sitting in the oncology department saying to the consultant, ‘but I feel great.. the best I’ve ever  felt and I’m going to the European Championships in a couple of months’. His reply. ‘Cancer doesn’t work like that. You might feel great now but anything can happen. Once we’ve done the surgery we’ll know for sure.’  Again in denial it didn’t hit me until I sat in a room with my mum and the consultant waiting to hear the results, that I realised the enormity of what was happening to me. Thankfully everything was ok.

3. Ride the curveball – It’s totally normal to feel a range of emotions when something happens and if you’re familiar with the change curve (Google ‘Kubler Ross’ if you’re interested ) you’ll recognise the stages you go through… shock, denial, frustration, depression, acceptance. Its part of the process, so allow yourself to let those feelings out. Everyone is different but you will move through the stages and get to acceptance eventually.

When I broke my foot I was terrified I’d get stuck in depression (I’d been there before) but I spent most of my time feeling frustrated! Frustrated because I’d lost my independence not because I couldn’t train. Frustrated because I couldn’t get around my house and I had to rely on someone for everything – taking Lillie to school, making my bed, tidying up. I had no idea I was so fiercely independent. Just like that, all of those little things I’d taken for granted, I couldn’t do any more.

4. But if I only had enough time to…? – Take away training and how much extra time have you got that you never had before? Turn a negative into a positive and use the down time as an opportunity to do the things you normally neglect… for me that’s strength and conditioning work. I cant honestly say I felt like doing much until recently but now I’ve started I love it! Its also a great time to do stuff that you’ve been putting off or try new things and imagine how many social events you’ll be able to say yes to without the guilt of putting off because you have a race or big training day planned. 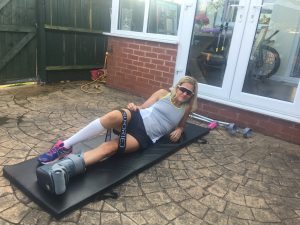 Because of the nerve damage it took a lot longer than I was expecting. Every day I would try and put my foot down and every day I’d end up in a heap on the bed crying at my stupid foot. Then one day completely out of the blue it happened. Once I’d done that everything started coming together really quickly.

A bit like breaking down a race in your head, I found it helpful to tick off the days and the progress I’d made. The half way point was a huge milestone and pretty much when things started to turn around. 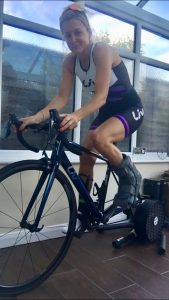 Today here I am, sat at my laptop 4 weeks to the day that I broke my foot having just done 5mins (in my boot) on the turbo. Even just a week ago I’d have never dreamt that would be possible and already I’m looking back wondering what all the fuss was about!?

Ok so I may have jumped ahead of myself on the goal setting front because I’ve just entered a 50 mile Time Trial for the end of July. I thought that might be a nice way to ease myself back in to racing 😉

Thanks so much for reading, I hope you’ve found it useful!